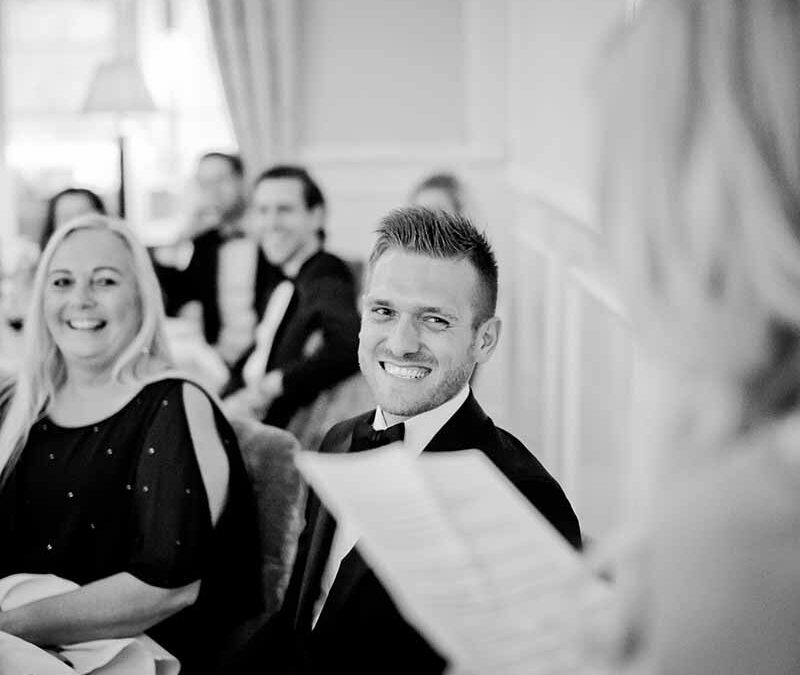 The term “White tie” refers to the most formal way of dressing. When an invitation calls for white tie, it requires that the gentlemen of the wedding party and male guests wear black tails and matching black pants, white pique front wing collar shirt, white pique vest and bow tie, and studs with white stones. (Pique refers to a pattern of small bumps running across the front vest or tie.) Today’s standards allow some variation from this theme and you may use a shirt, vest and tie that is not pique.

“White tie and tails” is traditional for evening weddings and receptions. However, contemporary standards accept this attire for grooms at any time of the day and allow it to be used along with black tie formal wear for groomsmen in order to distinguish the groom from the rest of the party.

“Black tie” can best be described as “party wear” or “evening wear.” Tuxedos fall in this category. Tailcoats are not officially tuxedos. A tuxedo is a suit which consists of a standard-length coat with some dressy trim and a pair of matching pants. Dinner jackets, light-colored standard-length coats with dark-colored trousers, also fall into this category. The term “black tie” can be confusing because it was adopted when black was the only color in which formal ties were available. Today, the term merely means that n gentleman may wear his tuxedo or dinner jacket with any color tie and cummerbund set. Tuxedos and dinner jackets come in many colors and styles, making it easy to coordinate with the colors chosen by your bride.

Daytime formal attire is referred to as a “Morning coat.” It was originally designed for daytime wear; however, it now is acceptable protocol for evening weddings as well. The morning coat attire gives the men in your party a turn-of-the-century appearance and is a popular choice. It is comprised of either a black or gray coat with matching gray and black striped pants, a pearl gray or light gray vest, gray and black striped four-in-hand tie (standard necktie) or ascot tie, and either a collared or wing collar shirt. The coat is designed as either a “Cutaway” with tails or a “Stroller” without tails.

Formal wear should not clash with the colors the bride has selected, and the groom’s attire should not upstage the bridal gown.

Your formal wear specialist will be able to guide you in choosing the formal attire that best represents the mood you want to create.